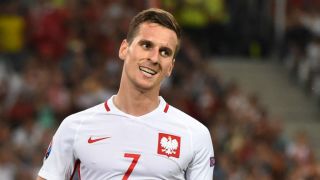 Ajax are keen to hold on to Arkadiusz Milik amid ongoing speculation linking the Poland international with a move to Napoli.

The Serie A side are looking to add some more firepower to their attack ahead of the 2016-17 campaign and they have reportedly earmarked Milik as the ideal addition to the their squad.

However, Ajax have made it clear they will not let go of the 22-year-old without putting up a fight.

"Who says he wants to leave the club? He could very well be keen to stay at Ajax.

"Plus we do not want to sell him just like that. That's all there is to it at this stage."

Milik joined Ajax from Bayer Leverkusen in 2014, initially on a one-year loan deal before moving to Amsterdam on a permanent basis last term.

The striker has a contract with the Eredivisie outfit until June 2019.