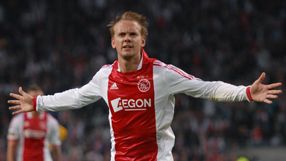 PSV Eindhoven, a point above champions Ajax in the Dutch first division, are top at the midway point of the season with 37 points from 17 matches despite being held to a 1-1 draw at NEC Nijmegen on Saturday.

They lead the standings on goal difference from Twente Enschede, who beat derby rivals Heracles Almelo 3-2 on Friday.

Aurelien Joachim soon pulled one back for the hosts before the unmarked Genaro Snijders equalised following a fine move.

Niklas Moisander restored the lead for Ajax 18 minutes from time from close range after De Jong flicked on a corner and Jody Lukoki settled matters when he scored off the post.

"If you take an early 2-0 lead you should seal a match quite easily but then you give away two easy goals and that forces you to use a lot of power to clinch the win," Ajax coach Frank de Boer told reporters.

Skipper De Jong added: "It was no surprise for me that we restored the lead from a set piece as we pay a lot of attention to those."

Following their sixth straight win, Ajax are one ahead of Vitesse Arnhem, who were held to a 2-2 home draw by mid-table RKC Waalwijk, and two above Feyenoord after the Rotterdam side struck late to seal a 3-2 win at home to ADO Den Haag.

Wilfried Bony opened up for Arnhem with a smashing header after eight minutes, his 16th goal of the season to top the Dutch scoring charts, but Teddy Chevalier equalised as he intercepted a backpass with 12 minutes remaining.

An own goal from Tjaronn Chery four minutes from time earned Feyenoord their win over Den Haag in a match in which both teams finished with 10 men.

Graziano Pelle and Lex Immers gave Feyenoord a 2-1 half-time lead after Mike van Duinen had equalised in between.

In the second half, Danny Holla converted a penalty for Den Haag while Feyenoord's Bruno Martins Indi was sent off for a profession foul on 57 minutes.

Seconds after the equaliser, Den Haag were reduced to 10 men when central defender Tom Beugelsdijk was shown a red card after elbowing former team mate Immers.

"I am very angry about Beugelsdijk's action as I warned him during the break to avoid the battles he got involved in the whole match and then he does something like this," said Den Haag coach Maurice Steijn.