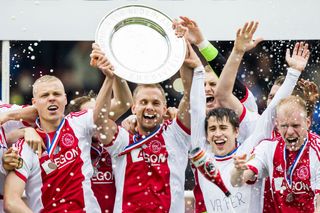 Having sat top of the table for the entire second half of the season, and wrapped up the championship with a game to spare.

Lasse Schone gave them an early lead at and although Heracles midfielder Simon Cziommer levelled midway through the first half, Ajax were able to take a draw to spark celebrations.

Below the Amsterdam club, Feyenoord secured a return to the UEFA Champions League play-offs after a season away with a 5-1 thrashing of Cambuur.