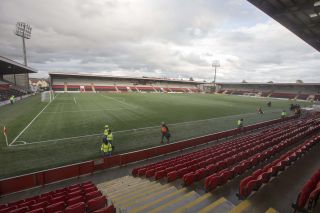 Goals in each half from Alan Trouten and Robert Thomson earned Alloa a 2-0 Betfred Cup win at Airdrie.

The Championship side took the lead in the 14th minute following a controversial penalty decision when Craig Thomson was ruled to have handled. Trouten netted.

Airdrie had chances and Dale Carrick and Calum Gallagher both came close on several occasions.

Thomson hit the post after a good run into the box before he soon headed home Jon Robertson’s cross to wrap up the win in the 69th minute.