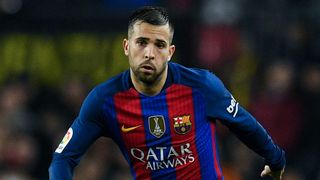 Jordi Alba is adamant he will remain at Barcelona despite rumours linking the club with a move for Atletico Madrid full-back Theo Hernandez.

Hernandez, 19, has impressed on loan at Deportivo Alaves this season, prompting speculation linking him with Liverpool, Real Madrid and Barca.

Despite potentially facing stiffer competition for a starting berth next season, Alba is under contract at Camp Nou until June 2020 and has no intention of giving up his place in the first team without a fight.

"If the club wants me to stay, I will, I want to stay [at] Barcelona," he said at an Adidas event on Thursday.

"I am happy with the minutes I have been playing this season, I feel so proud [to be] playing at home," added the 28-year-old Catalan, who developed in the Barca academy but had to prove himself at Valencia before earning a move back to his boyhood club.

"You can hear about Theo Hernandez and [there will be] other names the following week, [but] I am proud of being here."

Barca will be under new leadership next season, Luis Enrique having announced his intention to step down at the end of the campaign, but Alba, who has experienced less playing time due to the use of a three-man defence at times this term, claimed he is unconcerned about the identity of the Asturian's successor.

"It doesn't matter what I think about the next coach, we players don't decide, it is a president, manager and board of directors' decision," he said.

"[But] I prefer playing with four defenders."

Alba is also braced for a dramatic conclusion to the domestic season. Barca are top with three matches to go, level on points with Madrid, who have a game in hand on the reigning champions.

"LaLiga won't be decided until the last game [of the season]," Alba said.