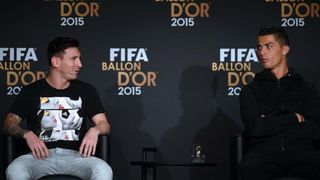 Barcelona defender Jordi Alba believes it would be "foolish" to disrespect Cristiano Ronaldo, but he is adamant the Real Madrid star is nowhere near the same level as Lionel Messi.

The Portugal international is believed to be sitting in pole position to pick up the FIFA Ballon d'Or this year after winning the Champions League and Euro 2016, but Alba feels performances on the pitch should be what matters most in the race for the prestigious individual award, suggesting Ronaldo's contribution to both titles was not as big as many have made it out to be.

"Many substitutes have won the Euros, World Cup or Champions League without contributing anything. In the end, it's what a player does on the pitch that counts and Messi has been the best," Alba was quoted as saying by AS.

"There is no comparison between the two of them. The debate will always be there and you have to respect Cristiano. It would be foolish not to respect him. He is a great player. But whoever likes football will think Leo is the best.

"What gives Messi an extra dimension is that he always remains calm. Whatever happens, nothing affects him and the way he plays.

"He is a star, the best in the world and he shows it year after year."