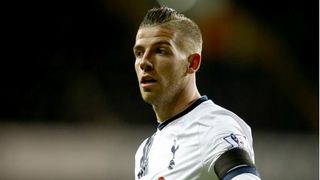 Tottenham coach Mauricio Pochettino believes Toby Alderweireld has proven himself as one of the Premier League's best defenders since joining the club.

The 26-year-old has started all of Spurs' league games this season after arriving from Atletico Madrid in July having spent the previous campaign on loan at Southampton.

Pochettino has been delighted with Alderweireld's performances, which have helped to give Tottenham the best defensive record in the division, with only 15 goals conceded in 19 games.

The former Southampton boss also recognised the impact made by Jan Vertonghen and Eric Dier to Spurs' efforts.

"It is obvious that Alderweireld, after 19 games, is one of the best defenders in the Premier League," Pochettino told reporters.

"It is easy to analyse him now, he adapts and has very good performances with maturity and experience. He is a great man and we are very happy with him.

"They [Alderweireld and Vertonghen] are good partners. For me it is important how we work as a team to try and defend our wall and our 'keeper.

"It is important to have a good balance and it is true that Toby has made a very good impact on the team."

Pochettino feels England international Dier has thrived as a holding midfielder and has no immediate plans to move him, even though the manager is not yet certain what position on the pitch will become the 21-year-old's permanent home.

"I am very pleased with Dier because he started to play in a position which is his real position," continued Pochettino.

"He has improved a lot, this is true. When I started to play in him as a holding midfielder we saw the quality that he can bring in that position.

"If we analyse the past of his career, he got into the national team playing as a holding midfielder.

"Maybe in the future his best position will be as a holding midfielder or centre-back or full-back. He is very young and now he is very comfortable in the position he plays."