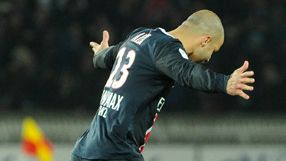 They are second to Montpellier on goal difference but the leaders have a game in hand, which they will play at Marseille's Stade Velodrome on Wednesday.

PSG's display was passable at best, but it was enough to see off Marseille who, despite some good spells at the Parc des Princes, continued their poor run with a 10th defeat in their last 11 games in all competitions. They remained ninth on 40 points.

The home side, who last won the French league in 1994, finished the game with 10 men when holding midfielder Mohamed Sissoko was sent off for a second bookable offence with three minutes left.

"It's always a special game, I think we had a bigger desire to win," PSG keeper Salvatore Sirigu told Canal +.

"The best thing, however, is that we stay in contact with Montpellier."

Once again, Ancelotti fielded a team without a recognised striker as Brazilian Nene, usually a winger, was used as number nine with Menez and Javier Pastore to support him.

That trio proved too much to handle for Marseille as PSG took the lead after only six minutes when Menez volleyed home after Christophe Jallet had fluffed his attempt into the path of the France winger.

The visitors, however, imposed a patient, possessive pattern on the match but failed to create clear chances as PSG held their one-goal advantage until the interval.

Marseille levelled just before the hour when Andre Ayew headed home after being set up in the box by Loic Remy's header, but they could not stay focussed and conceded from the restart.

Alex beat Alou Diarra in the air to head home a corner-kick and restore PSG's advantage.

"We were strong, we played well. We were the strongest team," a dejected Jordan Ayew said.

"But we need to move on and go past this huge disappointment."

Earlier, Caen moved out of the relegation zone and up to 16th with a 1-0 win against visiting Girondins Bordeaux.