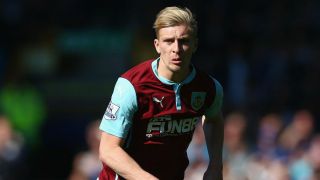 Mee was named Players' Player of the Year last season as Sean Dyche's side secured an immediate return to the Premier League after relegation in 2015.

Mee told the Clarets' official website: "It's brilliant and I'm delighted to extend my stay here at Burnley.

"After such a great season last year, and getting married in the summer, things just keep getting better and hopefully it will improve even more.

"I feel comfortable and at home here and we've been chatting for a while. Obviously it's been a busy summer, so it was something we put on the back burner, but it was always going to get done."

The 26-year-old, signed permanently from Manchester City in 2012 following a loan spell, added: "This club is going somewhere at the minute. It's been ever-changing throughout my time here and you can see the things going on at the training ground and the way the team is going.

"It's exciting and we're definitely moving forwards. Now I just want to help keep the team in the Premier League. That's my short-term goal and I want to be a big part of it.

"There's a togetherness and a will to do well and I am sure that will stand us in good stead."