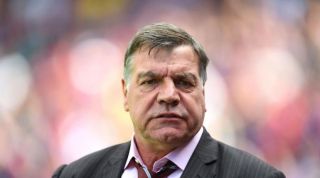 The hosts took the lead against the run of play in the 27th minute through Mark Noble, with the midfielder's long-range effort taking a deflection off Maya Yoshida.

However, Southampton drew level on the stroke of half-time as Morgan Schneiderlin put questions about his future to one side, bundling home from close range.

Schneiderlin was on target again midway through the second half, converting James Ward-Prowse's cross, and Graziano Pelle rounded off the scoring with his maiden Premier League goal, tapping in after Adrian could only parry a Nathaniel Clyne shot.

Allardyce had few complaints about the result, as he accepted that Southampton were considerably superior.

"As much as they were in control and on top of the game we've lost two very stupid goals from set-pieces.

"The big problem I had with the corner [for Southampton's second goal] was that it was a goal-kick, of course.

"I've had a look at it on the laptop and can the referee see it? Was he blocked? Why didn't he make the right decision?

"Having looked at it from Mike Dean's position he's got it horribly wrong when we don't need it to go against us."