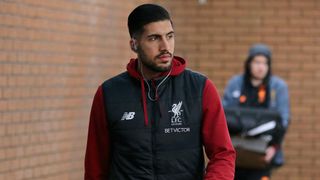 Massimiliano Allegri has done nothing to distance Juventus from speculation about a potential move for Liverpool midfielder Emre Can, speaking of his admiration for the "talented" German.

Can has entered the final six months of his contract at Liverpool and can open discussions with other clubs regarding a free transfer at the end of the season.

Liverpool have so far been unsuccessful in their attempts to tie the former Bayer Leverkusen man down to a new deal and time is beginning to run out.

Can has long been regarded as a potential target for Juventus and, although Allegri was not willing to discuss "the transfer market", the Italian did not hide his feelings about the player.

"We're all aware of Emre Can's qualities," Allegri told reporters at a news conference ahead of Saturday's trip to Cagliari.

: "We're all aware of Emre Can's qualities. He is a young, talented player who forms a part of an extraordinary midfield for Germany. However, I'm not going to talk about the transfer market." January 5, 2018

"He is a young, talented player who forms a part of an extraordinary midfield for Germany. However, I'm not going to talk about the transfer market."

Allegri will be without several first-team players for Saturday's match, with Gianluigi Buffon still missing due to a calf problem, as Allegri sees no need to risk him.

"Mattia [De Sciglio], Gigi [Buffon] and [Juan] Cuadrado are out of the match," he said.

"I'll evaluate [Claudio] Marchisio and [Stefano] Sturaro, who took a blow to the knee today in training. We will see, but Mario Mandzukic is in great shape. The whole team is in good condition, generally.

"Buffon is working towards a recovery from the injury he sustained against Napoli. It makes no sense risking him before the break."