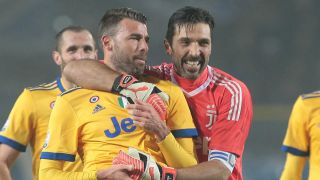 Juve took a third-minute lead through Gonzalo Higuain's smart finish, but conceded a spot-kick midway through the first half after Medhi Benatia handled in the area – a decision only made after referee Paolo Valeri had reviewed video footage.

Buffon, who was making his first start since the 1-0 win over Napoli on 1 December, got down well, though, to keep out Alejandro Gomez's effort.

Allegri reserved special praise after the game for his goalkeeper, who celebrated his 40th birthday on Sunday.

"I am happy for Gigi, who hadn't played in the Coppa Italia for five years," he said.

"He hasn't forgotten everything he knew just for being out of action for 45 days.

"He had a rest for a few weeks, perhaps he needed to put his feet up, but he's back now and he's our first-choice goalkeeper.

"Wojciech Szczesny did well in his absence and is a champion, but Buffon is Buffon.

"The goalkeepers are helped by the defence and the rest of the team working together to protect the back line."

The second leg at the Allianz Stadium is not until 28 February and Allegri was quick to stress that his side face some significant tests between now and then.

"We've got Sassuolo and Fiorentina, then Tottenham, so let's take it one game at a time and not get ahead of ourselves," he added.

"I am glad we honoured the Coppa Italia again this year."