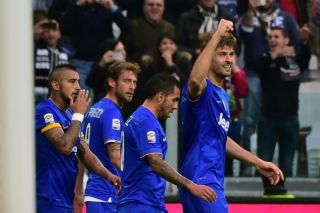 The Juventus coach opted to start Llorente in attack despite the availability of Alvaro Morata, who had impressed in the UEFA Champions League against Olympiacos in midweek.

And that decision was vindicated as Llorente, who scored 16 times in Serie A for the club last season, added to Arturo Vidal's first-half strike with a well-taken header.

That maintained Juve's unbeaten league start and restored their three-point lead over Roma at the Serie A summit.

"Llorente wasn't depressed at not scoring yet this season, but it's normal that a goal is important for a striker, even if he likes to play for the team," Allegri told Sky Sport Italia afterwards.

"This was the right game for him, both for his physical characteristics and to let Morata rest. I am happy he scored, as he repaid the faith we have in him and above all his own self-confidence."

Allegri added: "It was a poor first half and Palermo made it difficult for us, but we increased the tempo after the break and did better."

After a cagey opening, the hosts were settled by Vidal's 32nd-minute opener and went on to complete a 23rd consecutive home league win.

Claudio Marchisio was another player recalled for Sunday's game, having missed the Champions League defeat to the Greeks that puts Juve's qualification for the last 16 in doubt.

He told the club's official website: "It was important to win today and it's great that Nando's [Llorente] got off the mark for the season.

"It was a good win against a decent Palermo side, they caused us a few problems on the counter at times."