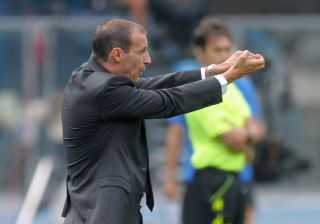 The Italian boss was speaking after seeing his side progress to the UEFA Champions League group stages with a 4-1 aggregate win over PSV, telling Sport Mediaset he would contemplate leaving the San Siro outfit to accommodate ongoing reports from the Italian media he was set to do so.

"For a couple of years this has been going on, so maybe I’ll resign tomorrow morning. I’ll think it over tonight," Allegri said initially.

But the 46-year-old quelled fears he would quit, claiming his sense of humour got the better of him.

"It was a joke, I only said that I would have taken a night to think about my possible resignation, it was a joke, so you have something else to write about, seeing that a lot of you have been writing about me being on the brink of being sacked in the last two years," Allegri explained.

"I gave you something different to write about. I don't like boring life, that's why I said, 'Maybe tomorrow I'll resign, I need to think about it'."

On their 3-0 second-leg victory on Wednesday, Allegri said he felt his side were truly tested by their Eredivisie counterparts.

"My compliments to PSV, they played an excellent match, they have talented players, they were well-organised, they created big difficulties for us," he said.

"My team worked as a team tonight, we saw a great save from (Christian) Abbiati at the beginning of the second half.

"We suffered, but we managed to create a lot in the first half and at the end of the game. I think we deserved the qualification against the second-strongest team of the five we could have faced."

Kevin-Prince Boateng scored a brace for Milan with Mario Balotelli also on target, although Allegri did not commit to being finished signing players as the transfer window nears its close.

"I'm happy with the squad I have, I'm in perfect agreement with the club, we have four days left in the transfer market and we'll see what to do," he said.