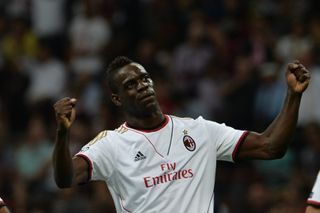 Balotelli scored Milan's second goal at the San Siro as Allegri's men triumphed 4-1 on aggregate to qualify for the UEFA Champions League group stages on Wednesday.

And Allegri believes that the 23-year-old has matured since his move from Manchester City in January.

"He has taken on a lot of responsibility. He's a real professional.

"We drew the toughest team out of the draw and the players have done really well and they deserve the win."

Milan secured a third-place finish in Serie A last season thanks to a dramatic 2-1 win over Siena on the final day.

"It would have been a shame to let the Champions League out of our grasp after all that we did in getting third place," he continued.

"The players did well and they get the credit. We're a young team and sometimes we pat ourselves on the back too much for what we've done but that shouldn't happen again."