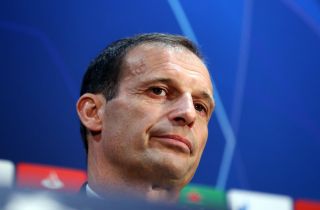 Juventus boss Massimiliano Allegri revealed talks over his future will be put on hold until the end of the season.

Allegri has guided the Bianconeri to four consecutive Serie A titles and his current deal runs through to 2020.

Even though they suffered a shock Coppa Italia defeat to Atalanta, ending the holders’ long unbeaten run in the knockout competition, the Turin club maintain a position of domestic dominance.

Juventus can further extend their 16-point lead over Napoli when they host Udinese on Friday night.

Speculation, however, continues over whether Allegri will still be in charge next season – with former boss Antonio Conte, who left Chelsea last year, a reported candidate to return.

It had been suggested a decision would be made on Allegri’s position following next week’s conclusion of the Champions League tie against Atletico Madrid, which the Italian club trail 2-0 following the first leg in Spain.

Allegri, though, confirmed he had met with Juventus chairman Andrea Agnelli over dinner and agreed to talk again once the campaign had finished.

“Last night I saw the president. We will meet again in June to discuss the renewal of the contract and to celebrate the trophies won,” Allegri said at a pre-match press conference on Thursday.

“One is the (Italian) Super Cup, we are close to the Scudetto (Serie A title) and we are still on course for the Champions League.

“The trophies need to be celebrated: every victory is the fruit of our work and the sacrifice we bring home.”

Allegri added: “The club and I are in tune. In the last five years we have built something important. In football, to win is something extraordinary and we need to continue and it’s even more difficult.”

The Juventus boss confirmed Cristiano Ronaldo is set to be available against Udinese, but will start on the bench.

Paulo Dybala and Mario Mandzukic are both stepping up their recovery from injury problems.

Allegri is not taking the challenge of Udinese lightly as Juve aim to extend their unbeaten Serie A run to 27 matches.

“It’s a game we need to win: we need to have a good performance and continue to gain points,” he said, quoted on the Juventus club website.

While Allegri may be looking to rest some of his key men for the European fixture next Tuesday night, Udinese boss Davide Nicola knows the Old Lady have plenty in reserve.

“What Allegri decides to do won’t really affect my choices – whatever team he puts out will be strong,” Nicola said.

“They’ve got huge resources in their squad – they are cannibals. We need to put a shift in to make them sweat.”

Nicola added at a press conference reported by the club: “We are realistic – our focus has been on training and recovering.

“To get something in this match, against an excellent side, we will need an almost perfect display.”