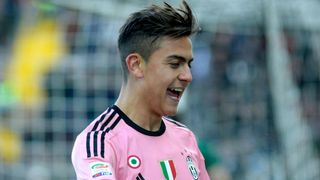 Massimiliano Allegri believes it is wrong to compare Paulo Dybala with Carlos Tevez after the Argentina forward inspired Juventus to a 4-0 win at Udinese.

Dybala scored a free-kick and a penalty as Juve romped to victory at the Stadio Friuli, in what was Udinese's first game at their home ground since the completion of renovation work.

Former Palermo star Dybala now has 11 Serie A goals this campaign and his form has led some to compare him with compatriot Tevez - who won two league titles and a Coppa Italia during a prolific two-year spell at Juve before departing for Boca Juniors in the close-season.

However, head coach Allegri feels the two have contrasting styles, telling Mediaset: "They are two different players, both in age and technical characteristics.

"Dybala has his entire career ahead of him, he is a very balanced guy and knows what he wants. Paulo has improved a lot but we must not put pressure on him."

All of Juve's goals came in a dominant first half in which Sami Khedira and Alex Sandro were also on target, while a red card for Udinese's Danilo further aided their cause.

Juve have now won 10 straight matches, but Allegri insisted Napoli - who are two points clear of the champions at the top - remain favourites for the title.

"Napoli are going at a remarkable tempo, so they are the Scudetto favourites for now, but there are still five teams up there who have a chance of winning the title," he said.

"We missed many things in the first half of the season, but I was not worried because we changed so much over the summer.

"A period of adjustment was only to be expected. We still have a lot of work to do and can improve further."