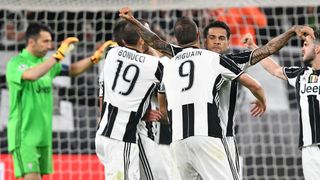 Massimiliano Allegri is keen for Juventus to get the Serie A and Coppa Italia titles locked up before thinking about the Champions League final against Real Madrid.

Juve can claim a historic sixth straight Scudetto with a point against second-place Roma at the Stadio Olimpico on Sunday and they will stay in the Italian capital in order to face Lazio in the Coppa Italia final three days later.

Should the Turin giants get the job done in both competitions they will have a chance to become just the second Italian side to complete a treble when the take on Real Madrid in the Champions League final in Cardiff on June 3.

But rather than getting carried away with thoughts about what could end up as the greatest season in Juve's history, Allegri is keen to remain cautions and take things step by step.

"At the moment we have not won anything. Tomorrow we have the opportunity to win the championship for the first time," he told a news conference.

"It won't be easy, these are two teams with high-level players who are chasing their goals. It will be a tough, tough game.

"We need to take things one step at a time, very calmly. We don't need to think about what will happen in a month.

"It's a beautiful moment, but we must be focused."

Juve were denied a treble by defeat to Barcelona in the 2015 Champions League final, and Allegri acknowledged this time there is more pressure on his team to succeed.

He said: "It's a completely different experience. Two years ago many did not expect us to reach the final, but this year there was a lot more expectation.

"We now have important games and three or four days before we will prepare the game.

"We have to go to Cardiff with the confidence that we can win the Champions League."