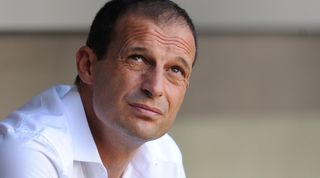 The Italians take on the Dutch outfit in the Philips Stadion for the first leg of the tie on Tuesday.

PSV have the advantage of having already started their league campaign – while the Serie A is not due to kick-off until Sunday.

"This challenge is similar to a quarter-final because it is played over 180 minutes," Allegri said.

"The only difference between the two sides is that PSV already have three league games under their belt and compared to them, we will be a bit weaker physically.

"For us this is the first important game of the season, despite many friendlies against the best teams in Europe."

Allegri was confident that enigmatic striker Mario Balotelli had recovered from a knee injury and would be available for start of their European campaign.

"(Mario's) knee problem is gone and he's an important player who can make the difference if he's got the support of the team," he said.

"Unfortunately (Giampaolo) Pazzini is injured until October, so hopefully Balotelli can be decisive at the front.

"As a striker, besides Balotelli we have (Andrea) Petagna, who's a kid who's doing well but lacks international experience."

With the left-back position up for grabs, Allegri hinted that Urby Emanuelson was slightly ahead of Kevin Constant to fill the role.

"Emanuelson played very well in all those friendlies in the US and is a player that, once back from England, proved he's ready physically and psychologically," Allegri said.

"So I can rely on him for that role."