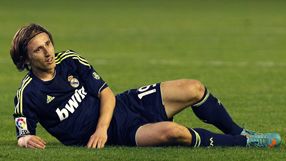 Modric, 27, left Tottenham Hotspur in August and has started only eight of his new club's 18 La Liga matches and three of six Champions League games.

Alonso, coach Jose Mourinho's preferred choice alongside Germany's Sami Khedira in central midfield, said he himself needed time to adjust when he returned to Spain from Tottenham's English rivals Liverpool in 2009.

"There are a few of us competing for that position and he is adapting to a new club and a new league," Alonso told a news conference ahead of Wednesday's King's Cup last 16, second leg at home to Celta Vigo.

"I found it difficult in my first season after coming from the Premier League but he is very well integrated, he is a fantastic lad and a great player. I have no doubt he will be important [to us]."

Real need to overturn a 2-1 deficit from last month's first leg in Vigo if they are to secure a meeting with Valencia or Osasuna in the quarter-finals.

Lying third in La Liga, Mourinho's side have looked ragged in defence in recent weeks and Alonso said stopping Celta scoring an away goal at the Bernabeu would be key to their progress.