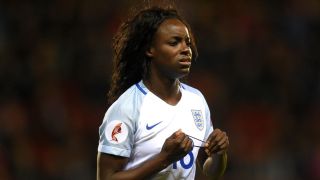 Phil Neville says he will consider Eni Aluko for future England squads, having left the Chelsea striker out of the 23-woman party to travel to the SheBelieves Cup.

Aluko has not played for her country since April 2016, having become embroiled in a legal battle with the Football Association (FA), but Neville insists his main focus is player performance.

The 102-cap striker has only played 90 minutes once for Chelsea in the WSL this season, but has four goals in her seven appearances.

Neville told reporters: "In terms of being selected for the squad, she's not played for Chelsea regularly. If she starts scoring goals and is playing well, then she is no different to anyone else.

"First and foremost, is she good enough to play for England? Is she scoring goals and playing well?

"Those are the first main factors and then you have to look at the bigger picture with who else is in her position – have we got competition for places?

"Ultimately, for me, if she is playing well, she's scoring goals, she will be considered. It is as simple as that."

The FA offered Aluko a formal apology after evidence proved that former Lionesses coach Mark Sampson made remarks that were "discriminatory on the grounds of race", Aluko having registered a complaint about comments allegedly made to team-mates.

Sampson was sacked during the probe into his behaviour as England coach over "inappropriate and unacceptable" relationships with players in a previous role.

Neville called up Aluko's club-mate Anita Asante to his squad for the tournament in the United States.

Asante was a vocal critic of Sampson and the FA, suggesting there was an "environment" of silence around the England women's team.

Neville said: "She wants to be playing, and I spoke to other players in the team and she is a very popular figure. I told her, 'Anita, I'm picking you on your ability to play football… your performances have warranted this call-up'.

"It's a clean slate and everyone is delighted."