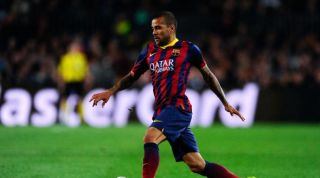 The Catalan giants failed to win a major trophy last term as they were pipped to the league title by Diego Simeone's Atletico Madrid.

The close-season signing of Luis Suarez from Liverpool has given Barcelona another option in their outstanding attack, which already includes Lionel Messi and Neymar.

The likes of Ivan Rakitic, Jeremy Mathieu and Thomas Vermaelen have also joined the club in recent months as new coach Luis Enrique prepares for a title push in 2014-15 campaign .

And Alves – who has decided to stay at Barca despite reports to the contrary – is confident Enrique can lead the club back to success.

"It is a pleasure to work with someone like Luis Enrique, he demands a lot from us and in the end that is what makes us excited," Alves said ahead of Barca's Liga opener against Elche on Sunday.

"We are working well and demanding a lot of ourselves. The target this year is a marvellous one.

"I think the teams that want to keep winning titles always have to be in evolution.

"We have the principal thing, which is clear ideas that are accepted by everyone. All that we need to do now is execute them."