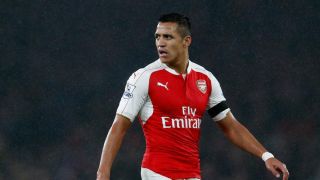 Alexis Sanchez has promised Arsenal fans he has no plans to leave the club and claims he is considering a celebratory tattoo, should they win the Premier League.

Sanchez is expected to return to the starting line-up for the title hopefuls' home clash with strugglers Chelsea on Sunday after more than two months out with a hamstring problem.

The Chilean attacker is enjoying his time in the capital and has set his sights on a league triumph following his key role in Arsenal’s FA Cup success last season.

"I am very happy at Arsenal and I’m not thinking about leaving," Sanchez told the Sunday Mirror.

"The unity here between fans, club and players is enormous and the supporters have been fantastic. We suffer the defeats and enjoy the ­victories together.

"This campaign we are ­demonstrating that we are serious candidates for the Premier League title. I think there can be no doubt about our credentials to be ­champions this time."

Arsenal need to beat Chelsea to move back to level-top with surprise package Leicester City after successive draws against Stoke City - who Leicester beat 3-0 on Saturday - and Liverpool.

However, the dropped points have not dampened Sanchez’s confidence in Arsenal’s pursuit of their first league title since 2004.

"It’s true that we have lost important points that could have given us a bigger advantage in the table, but, overall, we are having a very good season," he said.

"The spirit between the players is sensational and, when we do suffer a blow, we are able to overcome it. That’s very important.

"I am always ambitious in football and I still want to win three titles this season – the Premier League, the FA Cup and the Champions League. It will not be easy but we can do it."

He added: "It would be a dream. Right now, I don’t know what I would do if we won the league. But maybe a tattoo!"