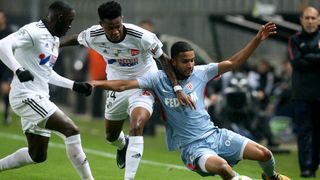 Ligue 1 champions Monaco suffered another setback in their title defence as they were held to a 1-1 draw by Amiens on Friday.

Stevan Jovetic cancelled out Serge Gakpe's opener at Stade de la Licorne but Leonardo Jardim's side could not avoid making it three away games out of four without a win in all competitions.

Amiens went into the match in the bottom three in the table, but a run of four games without defeat has given them a renewed confidence that shone through during the first half.

They took the lead on 31 minutes in some style, too, as Gakpe latched onto Gael Kakuta's pass before firing low left-footed past Danijel Subasic from the edge of the area.

Monaco looked an improved side after the break, with Radamel Falcao twice coming close and Rachid Ghezzal denied by Amiens goalkeeper Regis Gurtner.

Their growing pressure eventually told, as Jovetic slotted the ball into the bottom-left corner after Fabinho had teed him up at the end of a good run.

Kakuta and Falcao both came close to a winner in the closing stages but neither side was able to find a winner, meaning Paris Saint-Germain can go six points clear at the top if they beat Nantes on Saturday.