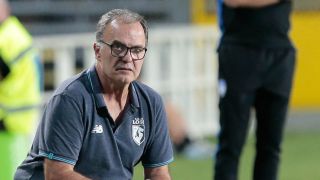 The Ligue 1 fixture between Amiens and Lille was abandoned early in the first half after a barrier collapsed in the away section of the Stade de la Licorne.

The incident occurred 15 minutes into the game after Fode Ballo-Toure had put Marcelo Bielsa's side ahead at the same end of the ground where the visiting supporters were situated.

While Lille celebrated the goal a section of the stadium gave way, resulting in a number of their fans falling forwards.

Officials stopped play while paramedics attended those hurt, with Amiens later tweeting that the match had been abandoned.

Bad scenes in Amiens, where a barrier collapsed under weight of Lille fans celebrating a goal. Match stopped. Awaiting news of injuries.September 30, 2017