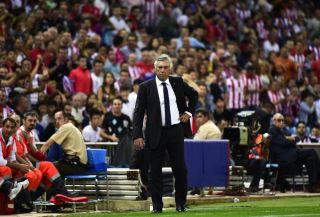 Atletico Madrid won 1-0 at the Vicente Calderon to secure the Supercopa 2-1 on aggregate thanks to Mario Mandzukic's goal in the opening minute and their city rivals were unable to get back into the contest for the remaining 89 minutes.

Ancelotti brought on Cristiano Ronaldo at half-time as Real chased the match, while Isco and Marcelo also came off the bench in the second period.

Di Maria was not in the squad altogether and although the Argentine's energy and speed was a feature of Real's Copa del Rey and UEFA Champions League success last season, Ancelotti claimed he did not need the attacking midfielder at Atleti's home ground.

"It was a technical decision. We didn't need Di Maria today," the Italian coach said after the match.

Ancelotti's response to Di Maria's absence will only add to speculation that the Argentine will leave Santiago Bernabeu before the end of the transfer window.

Friday's result saw Atleti defeat Real for the third time in their past eight meetings in all competitions, with the latter having also claimed three victories in that period - a far cry from Real's 10 straight wins from 2009-13.

Ancelotti bemoaned his team's lack of control in the second half at the Vicente Calderon.

"In the first half we played to a high level but in the second we gave Atletico more chances," he said.

"We lost control of play, with a lot of long balls. It was difficult for us and for that I made changes. I changed the positions of the three central midfielders."

Ancelotti took James Rodriguez off in the 65th minute, replacing the young Colombian with Isco, but Real's coach was full of praise for his new playmaker: "He played very well and was the side's most dangerous player.

"In the second half, when Cristiano came on, he was more withdrawn and tired and for this I took him off."