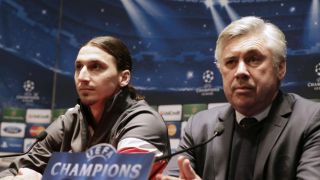 Ancelotti was in charge of the Sweden international during his time at PSG, with the pair part of the successful 2012-13 Ligue 1-title winning team.

Ibrahimovic's conduct - both on and off the pitch - has created controversy throughout his career amid rumours of disputes with team-mates, coaches and opponents in the past.

Marseille full-back Rod Fanni earlier this month claimed he had previously wanted to "punch" Ibrahimovic, who also hit the headlines in the aftermath of PSG's 1-1 draw with Lyon on Sunday when he walked off midway through a post-match interview.

Ancelotti, though, thinks any criticism of him is unfair.

"He jokes and he is a very happy man, he's just kidding," Ancelotti told Sport Bild. "But the image that people have of him is all wrong.

"One time he asked me if I believe in God, so I replied yes, he then asked me, do you think it is me?

"He loves to joke and that is just the way he is but inside there is a great professional.

"He is a winning type, a fighter and a leader within the team.

"I can think of very few strikers like him who prefers to find a great pass than to score a goal."