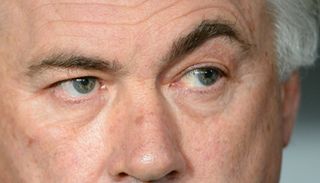 PSG President Nasser al-Khelaifi said on Monday they had rejected a bid by Real Madrid to hire Ancelotti, whose deal with PSG was automatically extended until June 2014 after the club attained Champions League qualification.

Ancelotti said on Thursday he needed some things to be clarified before he made a decision about his future.

"I have not talked with the club yet. We have a meeting scheduled on Friday, then we'll see," he told sports daily L'Equipe. "I want to continue if it's possible to continue.

"But I want to understand what happened during the season. Some things happened after our [league] defeat against Stade Rennes, then after the defeat at Nice," he added.

According to media reports, PSG's Qatari owner Sheikh Tamim bin Hamad al-Thani had threatened to fire Ancelotti when the team were fourth in the table after a loss at Nice in December.

"Actually, I want to understand whether I am here for a project or just for one result. That's the question," Ancelotti told L'Equipe. "I want to know what happened this season and what will happen in the future."

PSG, who have clinched their first French title since 1994 with two games left, host bottom club Stade Brest in the penultimate round of matches on Saturday.