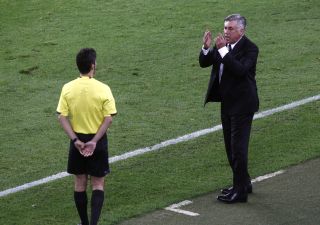 Goals from Neymar and Alexis Sanchez were enough to secure the win for the hosts and send Ancelotti to defeat in his first match against Barca as Real boss.

Jese Rodriguez netted a late consolation for Ancelotti's side, but it was too little too late and Madrid fell to their second defeat of the season and their first Clasico defeat in six matches.

After the defeat, the Italian questioned whether his side should have been awarded a two penalties during the game.

The first incident came when a loose ball appeared to roll over Adriano's hand, and the second when Javier Mascherano pushed Cristiano Ronaldo over inside the area.

Both decisions went against his side and Ancelotti felt that they were incorrect.

"The (Ronaldo) penalty was clear, everyone has seen it but the referee did not give it," he said.

"The Handball? I am not going to talk about it. It was an important moment in the game though.

"I am not going to blame the ref, we didn’t play well in the first half."

Despite the defeat, Ancelotti insisted he was happy with his side's performance after the break and felt they were beginning to show the cohesion he is searching for.

"The second half was very good," he added. "We pressed more and played more.

"We had control of the game, we had good chances to score.

"We wanted to win this game, but at this time we are improving and this game demonstrated that."