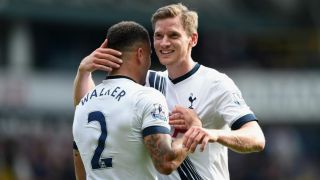 Jan Vertonghen is confident Tottenham can continue their promising start to the season against Anderlecht on Thursday despite their injury problems.

Spurs were dealt a blow on Tuesday when Nacer Chadli was ruled out for six weeks with an ankle injury picked up in the weekend draw with Liverpool.

Belgium defender Vertonghen, however, says his side can continue their run of just two defeats in 12 games in all competitions this term when they visit his homeland for this week's Europa League game.

"We have a big squad, we have enough players who can play," Vertonghen told Sky Sports. "We have a couple of injuries now but I think our squad is big enough to face the games.

"It's been very busy the last couple of weeks, but that's what we want. We just want games to stay in the flow we are in now. I think we are doing very well and we want to keep it up in Europe and the Premier League."

Anderlecht got back to winning ways at the weekend with a comfortable 4-0 victory away to Zulte Waregem to keep them just a point off league leaders Gent.

Prior to that victory, Besnik Hasi's side had been held 1-1 by Mechelen after losing 1-0 at Qarabag on matchday two of the Europa League.

And Hasi is confident that his team can trouble Mauricio Pochettino's side.

"This gives us good confidence for the games against Tottenham and Brugge," he said after the win over Zulte-Waregem.

"In recent weeks, we've had a lot of criticism because of missed chances. I told the players that Mitrovic is gone, but we have enough players to get us the goals."

Anderlecht's Mahmoud 'Trezeguet' Hassan was ruled out for several months last week after undergoing a shoulder operation, while Aaron Leya Iseka (knee) is a long-term casualty.

Spurs lead Group J with four points from their two matches, while Anderlecht are three points adrift in bottom spot.