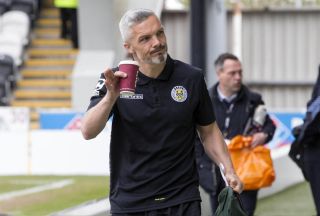 Tony Andreu knows all about Jim Goodwin’s brawn from their battles on the pitch – but the St Mirren playmaker believes his new boss also has the brains to bring success to Paisley.

The former Norwich and Hamilton playmaker admits he was left battered and bruised anytime he came up against the Irish enforcer during his playing days.

But now it is Goodwin’s savvy management that has struck the new Buddies forward.

It has not been the easiest of starts for Goodwin after returning to the club he once skippered.

His first game in charge ended in Betfred Cup defeat to Dunfermline while it took a last-gasp penalty to see off League Two Edinburgh City on Wednesday.

But Andreu is convinced his manager can make as big an impact in the dugout as he did on the pitch.

He said: “I played against the manager – I was covered in bruises at the end of the game. But now he is really calm and knows what he wants to do.

“He is very intelligent and clever and that is what we need this season.

“He has only been in for 20 days so it is still really early. It is still pre-season. It will take some time to get used to playing with each other and the system, but I think we are on the right track.

“We played well against Edinburgh but we could have played a bit quicker. In the second half we done that better and that’s how we won the penalty. We are getting there.

“Jim is amazing. He came in really positive, with a system, and with a way of wanting to play football. He wants to play from the back, not in a crazy manner, but knows sometimes you have to play a different way.

“He done that against Edinburgh by going two up front in the closing stages and that’s what we needed.

“He has been really good since he arrived. He really understands the players because it isn’t so long since he stopped playing, so that helps as well.”

Saints will look to keep their faint hopes of topping Group H alive when they take on East Kilbride at K Park on Saturday.

And Andreu says his team-mates will have to be patient again when they face up to the Lowland League outfit.

“It is never easy games against these teams,” he said. “There might be a difference in quality between the leagues but these sides come in and they compete.

“It is a cup game and they come in and raise their level.

“You need to be patient, do the basics and hope to find the goal. We need to have good finishing – I felt we lacked that a little on Wednesday – because if you do that early on you have a great chance of winning the game.”

Meanwhile, Saints have terminated Josh Heaton’s contract. He became the club’s most expensive signing in 25 years when he arrived from Darlington for £75,000 last summer but made just two appearances for the Buddies.