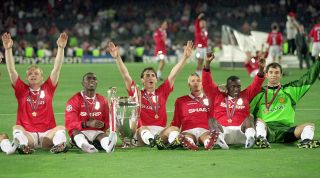 Alex Ferguson’s side famously scored two injury-time goals to overturn the German giants in Barcelona and conquer Europe’s premier competition for the first time since 1968.

United were beaten by eventual winners Borussia Dortmund in the 1996/97 semi-finals, lost to Monaco on away goals in the 1997/98 quarter-finals and, after the 1999 showpiece, didn’t reach the final four again until losing to Bayer Leverkusen in 2001/02.

Cole had left for Blackburn the previous summer, however, and believes he should have departed Old Trafford with even more winners’ medals.

Speaking in the new FourFourTwo Films production, How to win the Champions League by the men who have done it, he says: “Did winning that trophy change me as a player? No it didn't, because I wanted to win it a year after as well – and we should have won it a year before.

“You know, we should have won it a couple of years before and it never materialised. For me personally that was my biggest regret, not going on to win the Champions League again. The team we had was more than good enough.

“We had a great mentality. The manager believed in us as individuals, and believed in the team ethic. We believed we could beat anyone, and I think every team that season feared Manchester United in Europe.”

Cole played 48 Champions League matches over six seasons for United from 1996-2001, scoring 18 goals – including the semi-final winner over Juventus in 1999.

The 45-year-old, who retired in 2008 after further spells with the likes of Manchester City, Fulham and Nottingham Forest, has admitted that playing under the European lights is the thing he misses most about football.

"Playing in the Champions League is special,” Cole told FFT. "The anthem, the dew on the grass when it’s a Tuesday or Wednesday night.

"It’s possibly the only thing I miss about not playing football, it's an unbelievable evening. I've experienced it playing against some of the best players in the world; the crowd really really getting around the team.

“I always wished that one day I'd have the opportunity to play in it. So to lift the trophy, words can’t explain how special it is. All of us came from different backgrounds, and you appreciate how hard it is to get to that level.

“All you’re thinking is, ‘If I was a kid watching this..’ I can remember it like it was yesterday; celebrating afterwards, going back to Manchester... that feeling will never ever leave me to the day I die."