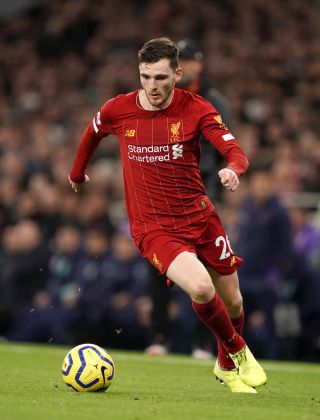 Liverpool defender Andy Robertson insists his side will not think about winning the Premier League title until the deed is done and remain determined to maintain their game-by-game mentality.

A 2-0 victory over arch-rivals Manchester United extended their lead at the top of the table to 16 points with a match in hand.

They require just 10 more victories – having already registered a remarkable 21 in 22 fixtures – to guarantee bringing home a first championship in 30 years and most observers are saying there is no way they can be caught now.

That is not the attitude in the dressing room, however, even if fans are now confident enough to sing ‘We’re going to win the league’, which got its first outing against United.

“We would obviously love to say yes – but no,” said Robertson.

“You are playing against your rivals who you’ve had great battles with over the years and the fans probably want to rub it in a bit but we’re not getting carried away.

“Until the champions sign is above our heads we don’t believe anything. Yes the lead is 16 points but we know how tough it gets.

“We’ve beaten United and in three days’ time we go away to Wolves, who are flying, and it’s an incredibly tough game.

“We know how hard this league is and how the table can change in a couple of weeks so it’s up to us to stay 100 per cent focused and not allow that to happen.

“If we do then we keep ticking off the games and we hopefully get closer and closer.

“We will let other people say that (they will not drop enough points to lose the title) but I don’t think anyone in that dressing room is believing that just yet and I think you can see that with every performance we are putting in.

“We can believe once the final whistle of that game goes.”

Jurgen Klopp’s side have proved they are a level above everyone else this season, having not lost a league match since January 3 last year.

That is a run of 39 matches and talk is growing about a potential ‘Invicibles’ campaign in the offing.

It is another landmark which does not concern the players at the moment though.

“We don’t think about that. We go into every game to win. For us that is the aim, because we don’t want to get beat and drop points,” added Robertson.

“We’ve said it many a time we work game-to-game and it’s worked well for us so why would we change that now?

“Looking too far and thinking can we go unbeaten is pointless. The last 39 games have been incredible but for us it is unfortunate it has not been in one season, it has been across two.

“We keep going, we are on a good run just now, we are confident. Seven clean sheets on the bounce is massive and long may that continue.”