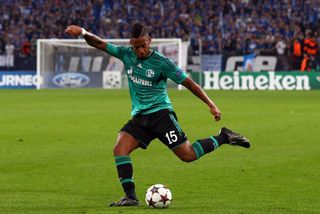 The full-back began last season on loan at the Veltins Arena before agreeing a permanent transfer from Hamburg in February.

His permanent move came about despite suffering anterior cruciate ligament during training in November, with Aogo making 16 appearances for the club prior to his setback.

With close-season preparations in full swing, the Germany international feels he could make his return to action at the DKB Arena this weekend.

"I increase the intensity of training from week to week and slowly the normal feeling comes back into the knee. It gets better," he told Schalke's official website.

"If this week in training goes according to plan, I will complete my first few minutes in the game against Hansa Rostock on Saturday."

The 27-year-old added that competitive match action is likely to spur his recovery on.

"It all feels good. Of course I have not recovered the feeling I had before the injury but that was to be expected," he added.

"It is a completely new situation for me, which I have to get used to. It's all about movements or even tackling situations [that] are difficult to imitate in rehab.

"Up to now, I am really pleased and I hope it stays that way. I think that my games in the pipeline will help enormously."