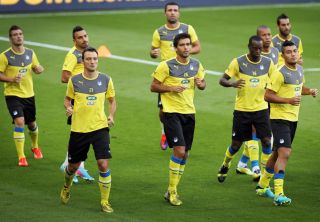 The Turkish club were disqualified by UEFA from European competition for a breach of match-fixing regulations and lodged an appeal to the Court of Arbitration for Sport (CAS).

That move enabled Fenerbahce to take part in a Champions League play-off with Arsenal.

Arsenal easily won the tie 5-0 on aggregate, a result that saw Ersun Yanal's side drop into the Europa League.

However, CAS dismissed Fenerbahce's appeal on Wednesday and upheld their two-year ban, a decision that left a space to fill in the Europa League draw.

Cypriot champions Apoel - who lost 3-2 on aggregate in the play-off round to Belgian side Zulte Waregem - were the side drawn out of the hat to replace Fenerbahce in Friday's draw. All defeated play-off sides were in the draw.