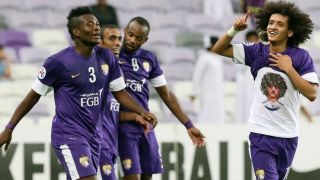 Arabian Gulf League champions Al Ain celebrated their title success in style after seeing out the season with a 1-1 draw against Al Sharjah, while Jonathan Pitroipa-inspired Al Jazira clinched the runners-up spot by beating Al Wasl 4-2.

Al Ain were initially set to play match away from home, but the King of the Sharjah emirate opted to waive Al Sharjah's right of hosting the fixture, thus enabling the champions to put on a spectacular show and receive the trophy at their own Hazza bin Zayed Stadium.

The match itself was by no means a dramatic encounter, though Wanderley's 75th-minute equaliser sealed a draw for Al Sharjah, ensuring Al Ain dropped points at home for only the second time all season.

The full-time whistle sparked extravagant celebrations from Al Ain, with fireworks and lights displays followed by the trophy itself being parachuted into the stadium, over three weeks on from winning the title. Their attentions now turn to beginning their President's Cup defence against Dibba al Fujairah on Thursday.

There was little to be decided during the final round of the league campaign, but Al Jazira did confirm their second-placed finish with a solid display at Al Wasl.

The visitors were 4-0 up by the 51st minute thanks to a hat-trick courtesy of Pitroipa and Ali Ahmed Mabkhout's solitary effort, with goals from Abdalla Mohammed and Fabio Lima in the final half-an-hour mere consolations.

Al Shabab went into the weekend level on 48 points with Al Jazira, though they could only draw 1-1 at home to Al Dhafra on Sunday, leaving them with a third-placed finish.

Al Wahda's 5-1 demolition of Al Nasr proved too little too late in their bid to claim an AFC Champions League place, finishing two points adrift of the top three despite Santiago Tagliabue's hat-trick.

Already-relegated pair Ajman and Al Ittihad Kalba both ended the season in familiar fashion, suffering 1-0 and 3-0 defeats at the hands of Al Fujairah and Emirates, respectively.