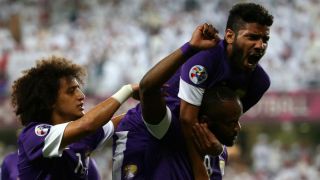 Already relegated Al Ittihad never looked likely to cause a shock, finding themselves 3-0 down by half-time on Thursday thanks to goals from Miroslav Stoch, Jires Kembo-Ekoko and Omar Abdulrahman.

Asamoah Gyan added the fourth with seven minutes to go, as Zlatko Dalic's men moved 10 points clear at the top, edging closer to the title they had looked destined to win for several weeks.

Eric Gerets' Al Jazira were strong favourites for the visit of Bani Yas on Friday, whose run of seven league games without victory had seen coach Luis Garcia come under increasing scrutiny.

But the hosts failed to cope with the added pressure, as former Barcelona and Deportivo La Coruna midfielder Joan Verdu opened the scoring 12 minutes in, before Mohamed Jaber and Bandar Mohammed got in on the act.

Mohamed Naser made it 4-1 soon after Mirko Vucinic had initially pulled one back in the 79th minute and, while Jonathan Pitroipa scored a second for Jazira in stoppage time, the hosts' late push proved in vain, as Bani Yas' triumph handed Al Ain the title.

At the other end of the table, Ajman's relegation was effectively secured after a 2-2 draw at home to Al-Shabab, whose grip on third was significantly loosened as a result.