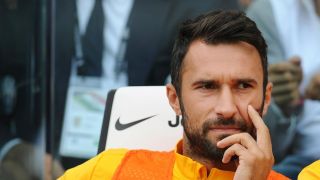 Mirko Vucinic opened the scoring for Al Jazira four minutes after half-time - his 19th league goal of the campaign.

Ali Ahmed Mabkhout added a second five minutes later and, although Boubacar Sanogo pulled one back for the home side, the leaders made the points safe thanks to Abdulla Mousa's late goal.

Al Ain remain level with Al Jazira on 33 points at the top - with a game in hand - after Mohamed Abdulrahman's 18th-minute effort saw them clinch victory.

At the wrong end of the table, Al Sharjah have now lost four consecutive games - either side of the mid-season break - following their 2-0 home reverse at the hands of Al Nasr.

The home side had Wanderley sent off 16 minutes from time and that proved a costly dismissal as Al Nasr netted late on through Hussain Abbas Juma and Pablo Hernandez.

Al Sharjah are now one place and two points above the bottom two, which consists of Al Ittihad Kalba and Ajman.

The former have just four points from 15 outings after their 1-0 loss at Bani Yas, while Ajman picked up a point from their 1-1 home draw with Al Dhafra.