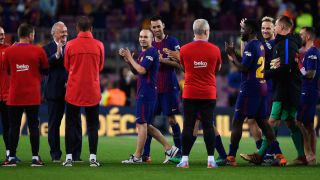 Barcelona found a novel way to pat themselves on the back after Real Madrid carried out their intention of refusing to provide the LaLiga champions with a guard of honour on Sunday.

Following a 2-2 draw in a typically pulsating Clasico, Barca staff – including head coach Ernesto Valverde – instead provided the traditional mark of respect which has become a hotly debated issue between the fierce rivals.

Zinedine Zidane confirmed prior to the match that a pasillo – as it is known in Spain – would not be offered, a response to Barca's shunning of the act in November, which came in the aftermath of Madrid's win at the Club World Cup.

The Blaugrana had formed a guard of honour back in 2008 and, if there was a thought they had simply forgotten the meaning of the gesture, it was dispelled after full-time as Valverde's men trotted off the pitch to applause.

Indeed, the Barca boss later confirmed the "improvised" new guard of honour had been at the suggestion of Gerard Pique.

The coaching staff perform a guard of honor for the team Força Barça! May 6, 2018