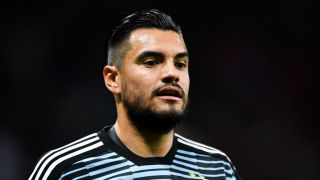 Argentina have confirmed Manchester United goalkeeper Sergio Romero did not sustain serious damage to his right knee in Tuesday's battering at the hands of Spain.

Romero collided with Diego Costa when the Spain striker opened the scoring in the 12th minute of the contest in Madrid, and – having initially tried to play on – was replaced by Willy Caballero as Argentina went on to suffer a humiliating 6-1 defeat.

The 31-year-old, who was starting opposite David de Gea, the man he plays understudy to at Old Trafford, consequently underwent tests that ruled out major damage.

A statement from Argentina read: "Sergio Romero suffered a trauma to his right knee.

"The tests done have ruled out any serious bone or ligament damage."

It remains to be seen if Romero will be available for United's squad to face Swansea City on Saturday.