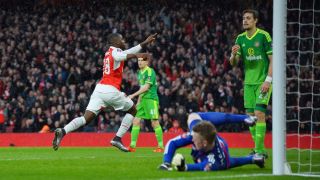 The Frenchman has never lost at this stage of the competition and is on track to become the most successful manager in FA Cup history - no manager has ever won it seven times - thanks to the victory over Sam Allardyce's spirited side.

Jeremain Lens scored his third goal of the season to give Sunderland a surprise lead, but Joel Campbell equalised for Arsenal less than 10 minutes later.

The Gunners, who left Mesut Ozil out of the matchday squad and lost David Ospina to a groin problem earlier on Saturday, struggled to give Sunderland's debutant goalkeeper Jordan Pickford much to do in a balanced first half. But the England youth international kept his side in the encounter as Arsenal increased the pressure in the second half.

Alex Oxlade-Chamberlain and Steven Fletcher both hit the woodwork, but substitute Aaron Ramsey - whose last goal in the tournament came in the final win over Hull City in 2014 - scored from close range before Olivier Giroud made the win safe five minutes later.

Kieran Gibbs tested Pickford early on, but it was Sunderland who struck first after 17 minutes. Laurent Koscielny dithered on the ball on the edge of the Arsenal area after a poor pass from Gibbs, and Lens took it from him before rifling right-footed past Petr Cech.

Arsenal responded, Pickford racing off his line to thwart Alex Iwobi's fine run into the box before some poor defending from the visitors allowed the holders to draw level after 25 minutes. Theo Walcott cut in from the left and clipped a low cross to the far post, where Campbell arrived completely unmarked to slot home first time into the bottom corner.

Despite the breakthrough, Arsenal looked short of inspiration in attack for much of the opening 45 minutes, but turned up the heat early in the second half, with Iwobi forcing DeAndre Yedlin into a vital clearance in front of his own goal before he brought a good save out of Pickford with a low drive.

Oxlade-Chamberlain endured a quiet first half, but he almost gave the holders the lead on 56 minutes when he rattled the woodwork with a curling effort from 20 yards, before Walcott scuffed the rebound wide of Pickford's left-hand post.

Sunderland then wasted a glorious chance to take back the lead as Fletcher powered a header onto the crossbar from just six yards out and young Duncan Watmore sliced the rebound high into the stands, before an Arsenal break saw Pickford save superbly to deny Campbell a second from right in front of goal.

Walcott was given another good chance thanks to Gibbs' cut-back, but his tame finish from the middle of the box went straight into Pickford's gloves, as Arsenal - having brought on Ramsey and Mikel Arteta - pushed for a winner. And the crucial third goal finally arrived with 18 minutes to play.

Campbell fed Hector Bellerin to the right of the area and his low cross was met by Ramsey from just three yards out, with the Wales international giving Pickford no chance.

The Emirates breathed a sigh of relief and the home fans were able to relax even more when Bellerin's driven ball across goal was met by Giroud, who prodded home at the far post to send Arsenal into round four again.