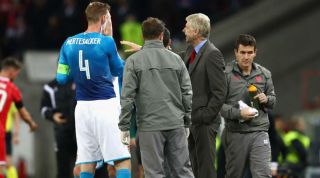 Per Mertesacker paid an emotional tribute to outgoing Arsenal boss Arsene Wenger ahead of the Gunners' Premier League clash with West Ham on Sunday.

Arsenal announced on Friday that Wenger will leave the club at the end of the campaign, bringing an end to his 22-year stint as manager.

Tributes to the Frenchman poured in from across the world, and Arsenal captain Mertesacker, who will take up a coaching role at the club during the close season, used his pre-match programme notes to laud Wenger, adding that the players will do all they can to cap the end of an era by winning the Europa League.

"It is only right that I begin these notes by paying tribute to a man who has taught me so much, both on the pitch and as a human," Mertesacker stated.

"We were only informed on Friday about the manager's decision to step down at the end of the season, so it's still quite emotional.

"Obviously he has been at the club for such a long time and he has been so supportive to me. One major reason why I'm here is because of him.

"He's been the major figure of this club for more than 20 years. He also gave me a future role here at the club so I am very grateful and humbled for the opportunity he gave to me.

"There's now an emphasis on us doing it for him too. We want to give him the send-off he deserves: with a cup."

“His passion is winning and making everyone aware that winning is the only option here. Now let’s all be united until the very end of the season and do this together. Thank you for your support.”April 22, 2018

Wenger's reign at Arsenal was littered with success during the 1990s and early 2000s, as the Gunners claimed three Premier League titles, four FA Cups and four Community Shields.

It was a different story between 2005 and 2014 as Arsenal went nine years without a trophy, and despite three FA Cup triumphs in the last four seasons, a failure to challenge for the league has seen Wenger's stock fall.

Mertesacker, however, is under no doubt that Wenger will leave the club in a strong position.

"It is a sad day for me but we're also moving forward for the future. The boss has brought in the right people at the right time and has had continuous success," he added.

"That really amazed me, in terms of his football knowledge and what he has brought to this country and this club. The people that he hired and the players he's signed have always made a difference."