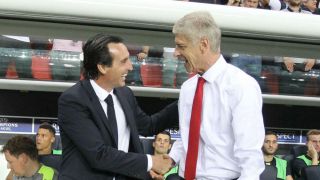 Unai Emery has no plans to seek the advice of his Arsenal predecessor Arsene Wenger after replacing the Frenchman as Gunners boss.

Wenger's 22-year reign came to an end last season, with Emery appointed as the club's new head coach in May following the Spaniard's departure from Paris Saint-Germain.

Emery plans to speak to Wenger at the annual managers' meeting in Nyon, but wants to put his own stamp over affairs at the club.

"Each coach needs to know the players. Not all the coaches have the same relationship with a player and I have my personality," he told a news conference.

"I have information on the players for the club, from the people around me.

"The information with Arsene is also important for me but the best is my direct relationship and conversations with the players.

"Normally, when we meet every year in Nyon with the coaches, we have a conversation together. I am sure we will meet together in the next week or month or in the near future."

Emery has been busy putting his stamp on Arsenal's squad for his debut campaign, with five players joining the club during the close-season.

Lucas Torreira, Bernd Leno, Sokratis Papastathopoulos, Matteo Guendouzi and Stephan Lichtsteiner have all joined, while Jack Wilshere, Santi Cazorla and Per Mertesacker are among those to have moved on – although the latter remains with the Gunners as academy manager.

But Emery does not foresee much more activity in the transfer market.

"We signed the players who we need, only if one player is a big opportunity for us to sign we can do it," he added.

"Normally we are thinking about the young players, the possibility to stay with us or go on loan to another team.

"In this moment I think the squad is complete, only the possibility for one player or two players to leave.

"To sign [a player] in the next month? Only if he is a big opportunity."

Emery denied that Arsenal are in talks to sign Steven N'Zonzi, a player he coached at Sevilla, and added that a more pressing concern is securing the future of Aaron Ramsey, who has just 12 months remaining on his contract.

On Ramsey, Emery Added: "I'm very happy with him. Every day every training session he is with the ambition I want. He is working with quality. I want to work with him.

"This [Ramsey's contract] is one question for the player, the club, but my opinion - I said to them - I think he is one important player for me."