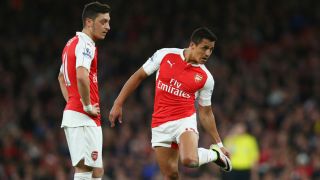 The attacking pair have only a year remaining on their contracts and the Gunners' failure to qualify for the Champions League has cast their future into doubt.

Sanchez has scored 29 goals in all competitions in an excellent season but continues to be linked with the likes of Bayern Munich and Paris Saint-Germain, while Ozil has also been tipped to move on despite an inconsistent campaign affected by injury problems.

Keown, a winner of three Premier Leagues and three FA Cups under manager Arsene Wenger, has criticised the current squad for being "a bit nice" to the Chile and Germany internationals.

"Ozil wasn't available for large periods. Was he injured, wasn't he? Was it sickness, was it injury? He didn't seem to be around when they needed him most," he told BT Sport.

"Sanchez then had an incident at the club [when he was dropped for the defeat to Liverpool at Anfield in March]. It felt like he threw his toys out of the cot for a little while. We don't really know exactly what happened.

"All of that was I think, as a result that these guys were maybe overindulged a little bit. I've been a bit surprised how the group have been a bit nice with them.

"I do feel like if I was playing in some of the games when Ozil doesn't get a perfect pass I think I already would have been in his ear telling him my bit: 'I'm trying to give the ball to you, don't disrespect me in the way you do when I don't get the ball to you'."

It remains unclear whether Wenger will sign a contract extension to stay beyond this season, with the 67-year-old having stated that he will not make his plans public until after the FA Cup final against Chelsea.

Keown believes his old boss has underestimated the impact of keeping quiet on his intentions but has urged him to stay at Emirates Stadium.

"When I played under him, he made everything feel warm, comfortable because of the security he gave you," said Keown.

"There was almost a love from the manager. So when he says he doesn't want to be a part of that or that he hasn't made his mind up, he is pulling away a lot of support and I think he underestimated that.

"He should help to find his replacement but stay on in the meantime. If he goes now we could be nearly into June before the new man is coming in.