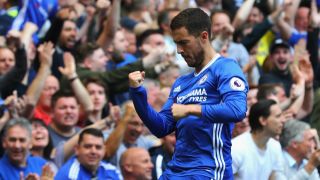 Aaron Ramsey says Arsenal must get in Eden Hazard's face to stop him from inflicting damage in the FA Cup final.

Arsenal meet Chelsea at Wembley on Saturday, Arsene Wenger's side bidding to salvage silverware from a season that saw them finish fifth in the Premier League, while the Blues chase a famous double.

"I think the way we started the [home] game in the first half was very good," Ramsey, who scored the winner in his side's 2014 FA Cup final victory over Hull City, said to Arsenal Player.

"We won the game in the first half really. We were very quick, we counter-attacked well, closed them down, got about them and everything seemed to come together on that day.

"I'm sure something similar will be required to beat them in the final as well.

"It was a different game [away] and we perhaps let individuals have a bit too much space. Hazard went on a bit of a run and put the ball in the net.

"We can't let that happen again, we have to be right in his face and stop that at source."

Arsenal are chasing a third FA Cup crown in the last four seasons, while Chelsea have not won the trophy since 2012.