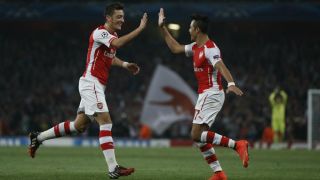 Arsene Wenger has stressed Arsenal are in no rush to open contract talks with Mesut Ozil and Alexis Sanchez.

A number of recent reports suggested the Chile international is on the verge of signing a new five-year deal with Arsenal, while the former Real Madrid midfielder has also been linked with a fresh contract.

Nevertheless, even though Wenger is keen to keep the duo at Emirates Stadium, he feels there is still plenty of time to discuss a contract renewal with both.

"Of course, we want them to stay at the club, but there is still time," the Arsenal boss said at a news conference.

Sanchez joined Arsenal from Barcelona in July 2014 and has since developed into a key player, scoring seven goals in 17 appearances in all competitions so far this term. The 26-year-old's existing deal is due to expire in June 2018.

Ozil, too, has a contract with Arsenal until the end of the 2017-18 campaign.