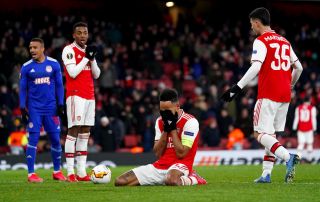 Arsenal crashed out of the Europa League as Youssef El Arabi’s goal in the last second of extra-time ensured Olympiacos advanced into the round of 16 after a dramatic victory at the Emirates Stadium.

The Gunners were lacklustre and deserved nothing more than to be humbled, although the manner of the 2-1 defeat will linger long in the memory.

Pierre-Emerick Aubameyang thought he had provided the heroics having equalised in the second period of extra-time after Pape Abou Cisse’s header had taken the tie into the additional 30 minutes.

But, after Gunners goalkeeper Bernd Leno fluffed his lines and cost his side a corner, Olympiacos recycled possession and El Arabi was on hand to steer Giorgos Masouras’ cross past the Germany international.

Mikel Arteta’s men had won their last three games and shown signs they were progressing following his December appointment but they were not at the races here as last season’s beaten finalists nearly exited early on.

It took Arsenal a while to find their rhythm but when they did the Olympiacos defence panicked, Ousseynou Ba booked for tripping Nicolas Pepe on the edge of the box after the winger had been slipped in by Alexandre Lacazette.

Club-record signing Pepe dusted himself off to take the resulting free-kick but it was too high to trouble Jose Sa in the visitors’ goal.

There would be no continued pressure from Arsenal and it was Olympiacos who missed the next decent chance as Mohamed Camara could only fire wide after charging into the box.

Arsenal thought they were ahead soon after as Bukayo Saka crossed for Lacazette to turn home but – unlike the goal from the same combination in Greece a week earlier – this one was ruled out for offside against the full-back.

After a first half with hardly any chances, it was Olympiacos who would stun north London as they look the lead.

Mathieu Valbuena put a corner into the middle of the Arsenal box and picked out a completely unmarked Cisse, who guided his header past Leno.

Instead of igniting a response from Arteta’s side, Olympiacos took confidence from their goal and Leno had to push a Kostas Tsimikas effort behind moments later as Arsenal rocked.

Granit Xhaka dragged an effort wide just before the hour-mark but the Gunners failed to force a shot on target until the 77th minute, Pepe drawing a smart stop out of Sa, with Lacazette then spurning a fine headed chance as the rebound was worked into him.

With the Olympiacos defence retreating towards their own goal, substitute Lucas Torreira was next to test Sa with a low effort from the edge of the box.

A fine Tsimikas challenge prevented Mesut Ozil getting a shot away as the game went into extra-time, with Shkodran Mustafi limping off injured at the start of the additional 30 minutes to be replaced by Sokratis Papastathopoulos.

But it was Olympiacos substitute Masouras who would clip the top of Leno’s crossbar as the second half of extra-time got under way.

Arsenal were still largely second-best but it would be their talisman, the man who has sparked so much debate in the last week, who looked to have salvaged their European hopes.

Ozil crossed into the middle where Gabriel Martinelli contested a header and the loose ball dropped out of the sky for Aubameyang to finish with an acrobatic bicycle kick.

But, despite just six minutes remaining, it would not be the end of the drama as El Arabi swept home in the final moments to send the away fans into raptures and close a door on the chance of silverware and a path to the Champions League for Arteta and Arsenal.