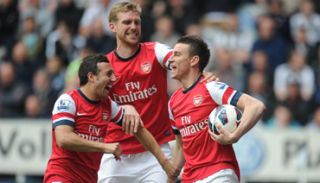 Two months ago it had looked as if Spurs would finally turn the tables on their North London foes when they beat them in the derby to establish a seven-point lead.

APP:Premier League stats at your fingertips with Stats Zone, and it's completely FREE

However, despite Gareth Bale's superb winner in a 1-0 victory over Sunderland on the last day of the season, they could only finish fifth as Arsenal secured fourth with one point more after a less than assured 1-0 win at Newcastle United.

"We've got 72 points, the highest total the club's ever got and we still miss out on the Champions League... it's hard to take. It's a hard day. It's not a good day."

Bad luck seems to follow Tottenham around in their pursuit of a place in Europe's elite club competition and Arsenal have a habit of capitalising.

Last year they were edged to third placed by Arsenal and while Tottenham's fourth-place finish would normally be enough for a Champions League place, on this occasion it was not as sixth-placed Chelsea took the final place as European champions.

Seven years ago, Tottenham needed to win against West Ham United to secure fourth place but most of the team came down with food poisoning the night before the game. They lost and Arsenal overtook them to clinch the coveted European spot.

They were again ruing their misfortune on Sunday after two decent penalty shouts were turned down in their game against Sunderland.

Winger Bale was shown a yellow card for diving midway through the first half when television replays suggested Seb Larsson's foul on him could have resulted in a Spurs spot-kick.

Referee Andre Marriner then also turned down appeals for a penalty after a second-half handball by Carlos Cuellar.

Arsenal manager Arsene Wenger, who faced many questions over his future at the club during the season, was delighted to have turned the season around and secured a 16th successive Champions League qualification.

"I'm proud of the character displayed and all we had to deal with during the season. These players are special I told them many times, they showed it in the last two months they have been absolutely exceptional," Wenger told Sky Sports.

"I'm very proud that we were very far behind Tottenham after the defeat there [in March], everybody ruled us out, we have shown attitude and character to come back."