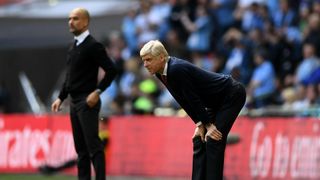 City continue to be linked with a move for Alexis Sanchez, who is out of contract at the end of the season and saw a purported switch to the Etihad Stadium collapse on deadline day in August.

Despite mounting speculation that Pep Guardiola will be imminently reunited with a player he coached at Barcelona, Wenger told a news conference ahead of Wednesday's EFL Cup semi-final meeting with Chelsea that Arsenal had received no official approach for the Chile forward.

City and Arsenal are both rumoured to be interested in signing ex-Manchester United centre-back Jonny Evans from West Brom, picking up another thread from the previous transfer window.

It was when discussing this deal that Wenger made his latest exasperated reference to City's financial might, having referred to the "petrol and ideas" driving the Abu Dhabi-owned club last month.

"It would only be philosophical to talk about [Evans] as long as we do not have any agreement with anybody. The best is not to talk," Wenger said.

"[We would need] to see off any interest of any other clubs, yes, and I don't know if Man City is in for anybody.

"I don't know what is their policy. If the decision comes to finances with Man City we know we will be second best. That is well known."

How are we likely to line up on Wednesday?January 9, 2018

On Sanchez, Wenger confirmed the 29-year-old is in contention for the first leg of the semi-final clash at Stamford Bridge and stuck to a well-trodden path when discussing his future.

"I expect nothing. I am focused on tomorrow's game," he said. "When solicitations happen you respond but at the moment it is very quiet.

"I have nothing to add to what I said before on that.

"To be professional is to perform no matter what the environment is. It is not a big influence on your performance or the performances of the team. It is part of our job to deal with that.

"I have not decided yet if he will play. I will decide today or tomorrow morning."

Arsenal are continuing to work on possible contract extensions for midfielders Mesut Ozil and Jack Wilshere who, along with Sanchez, are now free to discuss terms with clubs outside the Premier League as they are into the last six months of their current deals.

"That's not a big concern overall because I believe that most of the players today want to play in the Premier League.

"The Premier League can pay contracts and wages that no other club – apart from maybe three or four abroad – can pay."

One man who Wenger confirmed could be on the move this month is reported West Ham target Francis Coquelin after the midfielder was left out of the matchday 18 for Sunday's shock 4-2 FA Cup defeat at Nottingham Forest.

"It's a possibility but nothing is decided," he added. "We have no contact with West Ham."