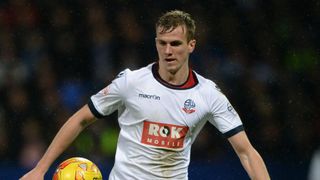 Arsenal have signed defender Rob Holding from Bolton Wanderers for an undisclosed fee.

The 20-year-old has penned a long-term contract having impressed in his breakthrough season at the Macron Stadium, making 30 appearances and winning the club's player of the season award.

He then helped England Under-21s win the Toulon tournament and will hope to challenge for a place in Arsenal's back four in the coming season.

Holding told Arsenal.com: "It's something you dream of as a kid – I can't wait to get started."

Holding's signing may not appease the Arsenal fans eager for boss Arsene Wenger to invest heavily in a squad that finished second behind Leicester City last season, but it fits the blueprint set out by chief executive Ivan Gazidis, who believes the policy of recruiting star names such as Mesut Ozil and Alexis Sanchez alongside players that can be developed – such as Holding – will pay long-term dividends.

He told ESPN FC: "This approach, for us, gives us a very, very powerful balance because it's not just about spending money but about how you spend your money and doing it wisely.

"It's about having a strong core philosophy and values within the club that players buy into and our fans can be proud of.

"These are all things that lead to success, and when you look at Arsenal over the last four or five years, there's no question that the squad has been progressing in strength.

"We've got a squad now that we believe is capable of competing to win the Premier League. We came in second last year, which was disappointing. But we're on the right track."